xChange 2017 Kicks Off with Leadership Day!

“HELLO! MY NAME IS URSULA AND IT MEANS ‘LITTLE BEAR’ IN LATIN!”

A young man is breakdancing on the floor of the conference meeting room. And another person is performing a secret handshake of some kind.

This is how we greet each other at Engineers Without Borders.

Leadership Day at the annual conference, xChange 2017, started off with a thought-provoking, fun, and challenging group activity to get everyone in the mindset of tackling the theme of Equality in Action. Each person had to come up with their own special rules for greeting and then trying to interact with others. The result was a sea of over 200 EWB chapter leaders, fellows, and staff attempting in earnest to understand what the other person was doing all while explaining their own rules. It was an exercise in humility, honesty, self-awareness, action-learning, and recognizing that it takes hard work to break down all the barriers to get through to one another. The fundamental skills we all need in order to see each other as human beings and start to bring about equality. And we got to laugh together.

Before the three-day conference officially begins tomorrow, Leadership Day is a way to bring together the leaders of the EWB community to share, reflect and reaffirm the direction, goals and strategies of tackling inequality and poverty by the organization for the year ahead. It’s a way to convene young leaders in the community to learn new skills, find mentorship in each other and from EWB staff, challenge strategies and explore and influence new areas of work, and think about how to apply all of this when they go back to real life. 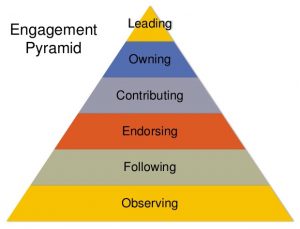 Nick Choquette-Levy, Calgary City Chapter President, has been involved with EWB for about five years in various advocacy roles. The pyramid of engagement really stood out for him. “Various people in the organization have different roles to play. It’s not always that you’re in one role for a set period of time. Even in one day, you can be an owner, a contributor or an endorser,” said Nick. Being a leader is not always being in control and making all the decisions, an effective leader also knows when to step back and let others step forward.

Landon Reeves, Founder and President of the Simon Fraser University Chapter, started with EWB just last year and there are about 10 dedicated members already. He learned a lot from a fundraising discussion in the afternoon and was struck by how knowledgeable the other chapter leaders were. The lexicon, acronyms (FYI: JF stands for Junior Fellows!) and vocabulary of EWB speak was a challenge to follow but he quickly caught up. “I was expecting people to be relatively nice but I’m taken aback by how passionate and driven everyone is. They actually care about these issues and keep asking why, why, why. This is a very different from what I’m used to at school,” Landon explained.

Rachel Hormeku is a 2017 Kumvana Fellow and the Head of Marketing for Barcamp Ghana, an initiative that trains youth in technology and entrepreneurship. When asked to talk about her relationship with EWB, she burst into joyous laughter and said ““EWB has changed my life! Literally!” She was also really interested to see EWB’s 2017 direction and hear about the organization’s exploration of Indigenous issues in Canada this year. “Over the years, EWB has been in Canada but has focused on issues facing the world. This year, EWB is looking at what’s happening in Canada and the relationship and history between Indigenous and non-Indigenous people. I’m really excited about tomorrow’s session on reconciliation. I’d be more than happy to support and contribute to working on this,” said Rachel. And that is the beauty of this fellowship program. The word Kumvana refers to the mutual exchange of knowledge for shared community benefit.

After a session-packed day and countless conversations, the crowd of EWBers end the day with a lot of new ideas to digest, friendships to grow, and reflections on how to put into practice the sense of optimism, urgency, and can-do attitude that is so quintessentially EWB.

Thankfully, no awkward goodbyes of breakdancing or handshakes were required.

Stay tuned to ewb.ca for more stories from xChange 2017!

During a time when the world was navigating the challenges associated with COVID-19, Scrapless co-founder, and former EWB Chapter President,...