As a self-described introvert, Matt Primeau didn’t usually like standing in the spotlight but his experiences with EWB gave him the tools to step up when presented with a challenge.

During a time when the world was navigating the challenges associated with COVID-19, Scrapless co-founder, and former EWB Chapter President, Matt Primeau was leveraging his altruistic nature and passion for making a social impact in a park in Vancouver. Realizing that food insecurity and food waste are two sides of the same coin, Matt and his co-founder Marc Apduhan revitalized their idea of creating a social venture that addresses this issue and helps their community.

“If you’re ready to grow and if you’re ready to use your engineering education, or anything similar, and put it towards social change, EWB is the investment opportunity for yourself that will get you there. So I highly recommend it for students or graduates.” 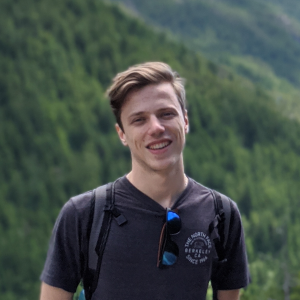 While studying in university, it is often difficult to feel like you are making a [social] impact, especially when many faculties function as silos and do not provide opportunities for cross-disciplinary collaboration. Matt Primeau faced a similar challenge when he had done his Bachelor’s degree in Civil Engineering at Carleton University and later completed his Master’s in Clean Energy. Although Matt was good at the technical side of engineering, he started losing interest in the subject as it did not enable him to make the type of impact on the world that he envisioned. This misalignment led Matt to question whether he was pursuing the right program and it positioned him to seek out other opportunities that would fulfill that gap.

“As engineers, we are really trained in the ‘how’ and the ‘what’ of problems, but ‘why’ is always the third question we’re asking. We’ve learned how to do things so efficiently as engineers and to do things better and better, but just because we can do something doesn’t mean we should all the time.”

Luckily, a friend of Matt’s told him about Engineers Without Borders and the work that the organization does and he decided to join in his third year of undergrad as a general member in 2015. Matt was involved in fundraising for overseas projects, participated in numerous conferences, and later became the Carleton Chapter President. During his Presidency, Matt’s Chapter had 30 active members, half of which were engineering and the other half, non-engineering students.

This facilitated the creation of a diverse group and exposed members to various perspectives and problem-solving tactics from different spheres, thus supporting EWB’s multidisciplinary approach and systemic lens.

On an individual level, Matt explains that EWB greatly developed his soft skills by giving him opportunities to practice them. One particular example that Matt recounted was speaking in front of a large audience during a conference after EWB CEO Boris Martin asked different individuals to come up on stage and share their stories. This public-speaking experience was a huge breakthrough moment for Matt and it has given him the confidence to flourish in the entrepreneurial space where he frequently speaks to large groups, pitches, and joins panels. Additionally, with the support of his mentor and members of the National Office, Matt sharpened his managerial skills through his role as Chapter President as he coordinated meetings, created a vision for the Chapter, made timelines and budgets, and fundraised for various projects.

Ultimately, Matt credits EWB with the start of his entrepreneurial journey as the organization invested in him and transferred a lot of knowledge that has opened his mind to thinking about problems more holistically and considering the ethical and moral standpoints of certain decisions and strategies.

Fast forward to today, Matt is the co-founder of a social venture called Scrapless which deals with food waste and food security in Canada. Coincidentally, Matt’s co-founder Marc Apduhan is also a former EWB Chapter President from the University of British Columbia and they happened to be roommates during a National Conference. Previously a student project, Scrapless was revived during March-April 2020 when food insecurity was exacerbated because of COVID-19 and both co-founders wanted to help. Although Canada has mastered agricultural production, there is waste at every point of the transaction from when food is grown on a farm to when it appears on someone’s plate. Consequently, Strapless aims to fill this gap in the food industry. At the minute level, Scrapless saves good food from going to waste which provides accessible meals to people in need. On a larger scale, Scrapless aims to eliminate food waste by using digital connections and technology to solve the gap in the management of the food supply chain and to connect various stakeholders.

Scrapless puts the environment first and hopes to impact the food industry and individuals by iterating their product to make sure they are tackling a problem that actually exists, and not one that they think exists. Eventually, through partnerships and scale, Scrapless aims to transform and impact domestic policies regarding food waste. The venture also actively works towards the following UN Sustainable Developments Goals: 2 – Zero Hunger, 10 – Reduced Inequalities, 11 – Sustainable Cities and Communities, 12 – Responsible Consumption and Production, and 17 – Partnerships for the Goals. In terms of impact measurement, Scrapless has a unique quantification process where it uses environmental measures in the form of meal equivalencies and carbon emissions. Any food saved can be converted into a meal equivalent by measuring its weight thus quantifying how much food is avoiding the landfill and making it onto people’s plates.

It is evident that the Scrapless’ values, practices, and goals align with EWB’s as both utilize systems change thinking and understand the importance and power of diversity and inclusivity. Matt also emphasizes the importance of clearly understanding why you are solving a problem and what the problem truly is for those who are suffering the consequences of that problem. His advice for budding entrepreneurs is to remember that the classroom is a controlled environment and that the real world functions differently, hence the importance of focusing on reality and not hypotheticals.

“So I would say, ask a lot of questions, be curious, and be open to listening more than speaking — having empathy and humility is key.”