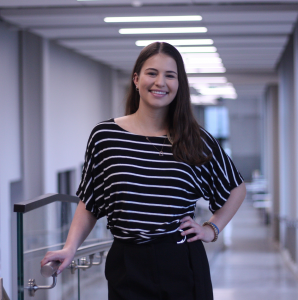 I am in a dual degree with Integrated Engineering and Business and wanted to share my experience doing the first-ever virtual Junior Fellowship (JF) due to — you guessed it — COVID-19 !!!

I’ve been involved with EWB since my first year of university, first as a general member, last year as the Partnerships Director, and now as the Sustainability Director and Returning JF. I started to get more heavily involved in EWB during my second year because I wanted to start making a bigger impact now. People generally always told me to wait until after I graduate to make a difference but I never understand why, the best time to make an impact is always right now. Which is why I was so excited to hear that our school would be doing the fellowship this year.

I was placed with Ensibuuko, a fintech start-up based out of Kampala, Uganda after an interview at 1:30am. That was my first clue that the time difference might be interesting. Because of the time difference I often would have my calls between 7am and 10am (sometimes random ones in the middle of the night where I’d wake up, have a meeting at 3am and go back to sleep), but mostly I would communicate with my manager via slack. Overall, I usually was working part-time hours at random times of my day. I often would be up for a few hours in the morning when everyone else in the company was up, but otherwise just whenever fit my day. I basically had to expect if I had any questions or needed something, I’d have to wait a minimum a day for response.

As a Fundraising Associate, my main goal was to put together tools for my manager so that whoever is hired full time to take over would have a good foundation to grow off and would understand Ensibuuko’s language. My main role was to write and edit grant applications and proposals and all the accompanying documents. Previously, my boss, the CEO of  the company, Otim Gerald, would handle all of these himself which would just add to his already busy plate.

Additionally, another JF with Ensibuuko, Raian and I did an entire rebrand of the website and logo. Ensibuuko wanted something that reflected the modern aspects of their software and competed with other local fintechs. It was super awesome to  see the results of this project all the way through.

Ensibuuko offers software for the unbanked and underserved individuals in Uganda by providing whatever non-bank financial institution they’ve established to gain access to secure mobile transactions and records. It’s incredibly impactful work as it allows for more individuals to obtain loans, establish an additional source of income, and have resiliency in the event of an unforeseen circumstance. Ensibuuko is the only company that has a product for Village Savings and Loan Associations, groups of 15-25 individuals in remote areas who pool their money together to provide loans for other members and obtain a profit. These groups are 85% women and 60% refugees, empowering both groups to make decisions for their households and communities. I honestly find the work Ensibuuko is incredibly impactful and necessary for the mission of empowering people first 🙂

I’ve had the opportunity to learn many hard skills, but more importantly I’ve learned so much about the context and economy of Uganda that will influence how I look at international development in the future. Additionally, Otim has been such an inspiring person to work with as he is so passionate, such a hard-worker and truly dedicated himself to the company. His vision has made ensibuuko what it is today and it’s been an honour to get to work with him over the last four months.