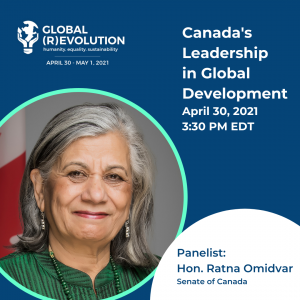 Ratna Omidvar is an internationally recognized voice on migration, diversity and inclusion. In 2016, Ms. Omidvar was appointed to the Senate of Canada as an independent Senator representing Ontario. As a member of the Senate’s Independent Senators Group she holds a leadership position as Liaison and was previously the Deputy Chair of the Special Senate Committee on the Charitable Sector. Senator Omidvar is a Director both at the Samara Centre for Democracy and the Century Initiative, a Council Member at the World Refugee and Migration Council and Chair Emerita at the Toronto Region Immigrant Employment Council. Previously at Ryerson University, Senator Omidvar was a Distinguished Visiting Professor and founded the Global Diversity Exchange. Senator Omidvar was appointed to the Order of Ontario in 2005 and became a Member of the Order of Canada in 2011, with both honours recognizing her advocacy work on behalf of immigrants and devotion to reducing inequality in Canada.