Home About Us Our People Global Revolution Panelist Jeff Geipel 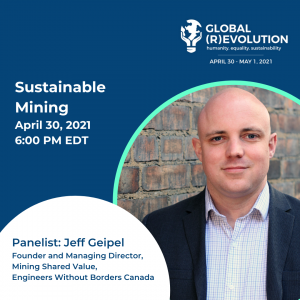 Jeff Geipel is the founder and managing director for the Mining Shared Value initiative at Engineers Without Borders Canada. This initiative works to improve the development impacts of mineral extraction in host countries through increasing local procurement by the global mining industry. Through this work Jeff is also the Community Manager for the World Bank’s Extractives-led Local Economic Diversification Community of Practice. Before Engineers Without Borders Jeff was the founder and first executive director of Fair Trade Vancouver, which became a model for municipal-based fair trade organizations across Canada. Originally from Vancouver, Jeff holds a master’s degree in international development from the London School of Economics in the United Kingdom. Jeff’s work and articles have been featured by the Guardian, Devex, the Globe and Mail, National Post, Next Billion, Mining Weekly and Hill Times Magazine. Jeff currently resides in London.