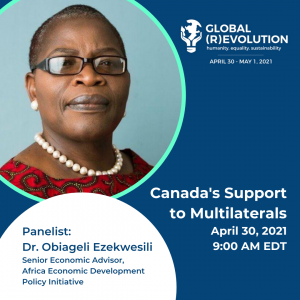 Obiageli “Oby” Katryn Ezekwesili who was a candidate for office of the President of Nigeria in the 2019 election, is an Economic Policy Expert / Senior Economic Adviser, Africa Economic Development Policy Initiative (AEDPI) and Co Founder of #BringBackOurGirls Movement, Nigeria. Dr. Ezekwesili is the founder of #FixPolitics, a research-based citizens-led initiative which envisions “A country where politics is inclusive, the needs of citizens are prioritized, democratic principles are respected, such that good governance is the norm”.

A Chartered Accountant and Consultant; She holds an MA in International Law and Diplomacy, an MA in Public Policy and Administration from the Kennedy School of Government, Harvard University. She’s an honorary Doctor of Science degree, Federal University of Agriculture Abeokuta and in 2016 the University of Essex Business School awarded her an honorary Doctorate Degree in Business in recognition of her role in promoting economic and social justice in African countries.

Dr. Ezekwesili was recognized as one of Time-100 Most Influential People and by New York Times as one of the 25 Women of Impact, 2015. Albert Einstein’s Foundations named her one of 100 visionaries featured in the 3D book “Genius:100 Visions of the Future”. Dr Ezekwesili is a globally renown Speaker. She has received numerous awards and serves on the boards of numerous local and international organizations such as; Board of Trustees, the International Bureau of Fiscal Documentation (IBFD); Honorary Member, Committee of the Crans Montana African Women’s Forum; Board of Director of the Economic Policy Think Tank, AfriHeritage; Ambassador, International IDEA; Member of The Global Advisory Board for Facebook’s Community Leadership Program; Global Board of Governors, NCMG International; Member of the UN Refugee Agency (UNHCR)’s Advisory Group on Gender, Forced Displacement and Protection; Member of the Advisory Board of the Atlantic Dialogues; Independent Director, Board of Bharti Airtel India; Member of Board, Tufts University-Global Leadership Center Boston; International Advisory Board, Tel Aviv University, Hartog School of Public Policy, Tel Aviv, Israel; Central European University-School of Public Policy, Budapest Hungary; Global Board, WWF- Switzerland; Commissioner, Global Ocean Commission – United Kingdom; IC Publications; Democracy Ambassador – International IDEA; 2018 Nobel Peace Prize Nominee; and several other numerous local, national and international awards. She was decorated with the Highest medal in Nigeria, the national award of Commander of the Order of the Federal Republic (CFR).