Home About Us Our People Global Revolution Panelist Douglas Saunders

Doug Saunders is an author, journalist and consultant of Canadian and British citizenship. 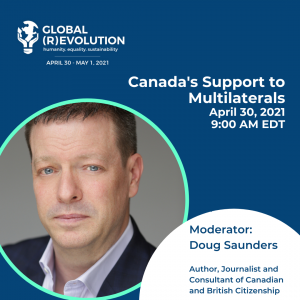 He is the author of the books Arrival City: The Final Migration and Our Next World (2011), The Myth of the Muslim Tide (2012) and Maximum Canada (2017). Currently resident in Berlin and Toronto as a 2019-2021 Richard von Weizsäcker Fellow at the Robert Bosch Academy, he is also the international-affairs columnist for the Canadian national newspaper The Globe and Mail. He served as the paper’s London-based European bureau chief for a decade, after having run the paper’s Los Angeles bureau, and has written extensively from East Asia, the Indian Subcontinent, the Middle East and North Africa. He writes a weekly column devoted to the larger themes and intellectual concepts behind international news, and has won the National Newspaper Award, Canada’s counterpart to the Pulitzer Prize, on five occasions, as well as the Schelling Prize for Architectural Theory, the Donner Prize and the National Library of China Wenjin Book Award. He was a co-designer of the Germany pavilion at the 2016 Venice Architecture Biennale, which was based on is book Arrival City. His current work examines the neighbourhood-scale manifestation of larger social and economic crises, with field work in seven countries.

RSVP to Join Doug at EWB’s Global (R)Evolution Panel “Canada’s Support to Multilaterals: How to Better Engage for Development Needs” (April 30 @ 9:00AM ET)