Home About Us Our People Global Revolution Panelist David Miller 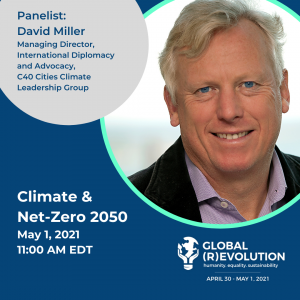 David Miller is the Director of International Diplomacy and Global Ambassador of Inclusive Climate Action at C40 Cities Climate Leadership Group. He is responsible for supporting Mayors in their climate leadership and for building a global movement for socially equitable action to mitigate and adapt to climate change. He served as Chair of C40 Cities from 2008 until 2010. Miller was Mayor of Toronto from 2003 to 2010. Under his leadership, Toronto became widely admired internationally for its environmental leadership, economic strength and social integration. He is a leading advocate for the creation of sustainable urban economies, and a strong and forceful champion for the next generation of jobs through sustainability. Miller has held a variety of public and private positions and served as Future of Cities Global Fellow at Polytechnic Institute of New York University from 2011 to 2014. David Miller is a Harvard trained economist, professionally a lawyer and author of the book Solved: How the World’s Great Cities are Fixing the Climate Crisis.